Psalm 14:1, which begins with, “The fool says in his heart, ‘There is no God’,” is often a text cited by Christians when speaking against atheism. But, while this verse certainly has a valid application regarding atheists, I wonder if we do not regularly overlook the wider point of Psalm 14. 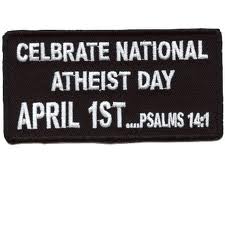 BUT, lest the above reflection provide a pretext for pride, consider: in your natural state (Eph 2:3) YOU are a fool as well. Apart from the grace of God, we ALL are fools.

AGAIN: Psalm 14 is NOT just directed against people who would call themselves atheists. This is evident even from the end of Psalm 14:1, “There is no one who does good.” This idea is further developed in verses 2-3:

2 The Lord looks down from heaven
on the sons of men
to see if there are any who understand,
any who seek God.
3 All have turned aside,
they have together become corrupt;
there is no one who does good,
not even one. (NIV 1984)

(These exact words are picked up by the Apostle Paul in Romans 3:10-11 as he argues that all people are under God’s judgment due to their sin.)

In our natural state (Eph 2:3): who understands spiritual matters? The answer comes: “No one.” Who seeks God? “No one.” Who does good? “No one… not even one.” On the other hand, “All have turned aside; they have together become corrupt.”

And even believers– those who have been rescued from this natural state by the Holy Spirit– when we sin, we act as if there is no God: we act like fools.

Reflecting on Psalm 14 should make us cry out for a Savior. Indeed, note that this Psalm ends with a cry for salvation:

Oh, that salvation for Israel would come out of Zion!
When the Lord restores the fortunes of his people,
let Jacob rejoice and Israel be glad!

Trust in Him today.

No Response to “universal atheism”